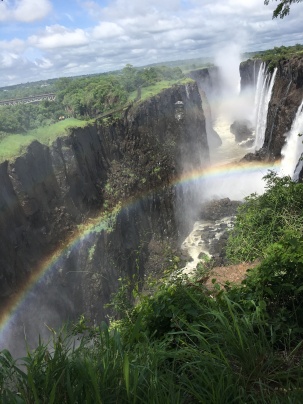 Victoria Falls or Mosi-oa-Tunya (The Smoke that Thunders) forms the border between Zambia and Zimbabwe. It’s the fourth largest waterfall in Africa, and regarded as one of the seven natural wonders of the world. The peak month to see the most water is in April, and the lowest levels are in October-November. I went in January, and it was perfect.

One of the best views of Victoria Falls is via helicopter. It was my first time in one and it was breathtaking. I got to see so much in so little time. Also, the helicopter dipped down into the gorge and it felt like an Indiana Jones movie. On our flight back to the helipad, I also saw elephants on the Zimbabwe side. Hotels can arrange the whole trip at least a day in advance.

My family and I went with a guide from our hotel to see the falls on land, so we just followed along. He took us through the lush jungle paths and we had amazing views of the waterfall.

He offered to take us to the Boiling Point at the bottom of the falls, but it was too much effort for us just to see rushing water. He pointed out Devil’s Pool, which is on the Zimbabwe side. That’s where you’d see pictures of people swimming up close to the edge of the falls. Sadly, I didn’t get to do that, as I was on the Zambia side. On the plus side, there were a bunch of baboons with their babies on our trail. 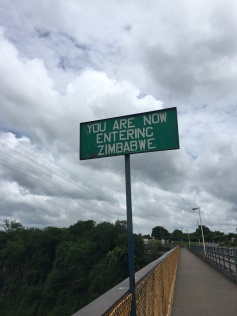 I wish I had the courage to bungee jump off the Victoria Falls Bridge, but I can barely do it at my state fair. There’s also an option to swing off the bridge, and I would’ve been more inclined to try that, but the setting still doesn’t seem the safest. I’d definitely have to see someone go first.